I love mini-reviews. They’re a way for me to get a bunch of reviews off my plate at once and from the poll I had you guys take a few months ago, you seem to like them, right? 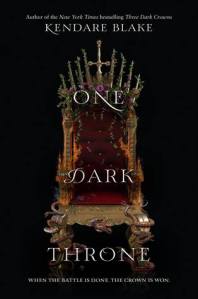 One Dark Throne by Kendare Blake

To see my review for the first book, please go here. I really loved the first book and as soon as it was done, I wanted to get my hands on the second. However, this book was not as engaging or attention-catching as the first one. I still have questions about the world and how some things are supposed to work–there never really seems to be explanations for anything. Some of the plot points towards the end were surprising to me and I’m still a little confused…but I don’t want to give spoilers. Overall, this book doesn’t make me feel like I need the third book like I needed the second, but I’ll still read it. 4/5 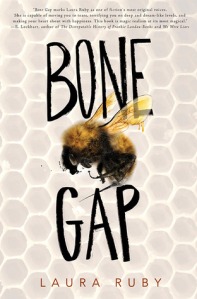 This book had been on my TBR for a few years before I finally got around to reading it and by the time I did, I had completely forgotten what the book was supposed to be about–and I think that was a good thing. It takes a while for the book to get going, but once it does, I felt really invested in the characters. I really liked Finn and felt bad for both him and Sean. I thought this book was especially interesting because I felt like it combined a lot of elements that might not necessarily go together, but did. Such as: magical realism, farm/small town life, an immigrant story (Polish culture), rare disease/disability, sexual harassment/rape, broken families. That sounds like a lot, right? But I thought it all worked really well together and I ended up really liking the book. 5/5 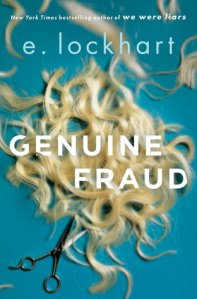 I really enjoyed We Were Liars, so I was moderately excited to read E. Lockhart’s more recent release as well. The premise sounded a little confusing to me, but it was recommended at my local library’s “Best of 2017” event, so I thought I’d give it a try. I thought the book was confusing, but intriguing at the same time. The main character seemed very complicated. I started out feeling like I knew her pretty well, but as the book progressed I started to realize that actually, I know nothing about her. She’s a complete stranger. So I finished the book, and I liked it quite a bit (I thought the format was especially interesting). But then I found out that it’s pretty much exactly the plot for The Talented Mr. Ripley. At the end of the book, Lockhart does state that she was inspired by Ripley, but honestly, the plot is almost exactly the same, just with a teenage girl instead of a 20-something man. Overall, I still enjoyed it though. 4/5 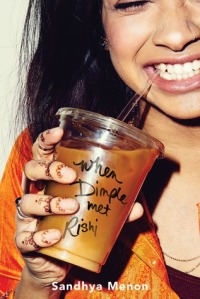 For some reason, this book did not appeal to me at all even though I’d heard really good things about it. But then it was one of the free reads on Riveted by Simon Teen, I was bored at work, and I thought “what the heck?” so I started reading it. I liked both Dimple and Rishi–they just both seem like GOOD KIDS. And I appreciate that Dimple is a smart girl who (for the most part) isn’t a spaz or incredibly socially awkward or overly uptight. I will say that Rishi did feel a little unreal to me. Do teenage boys like that actually exist? Claudia on the other hand is a complete mess. She’s the worst friend. Literally the worst. I thought the plot was pretty good, there were some things I liked towards the end but (mini-spoiler) I almost wish that Rishi and Dimple had ended up with other people. Did anyone else feel that way? I don’t have anyone specific in mind, but the whole point was that Dimple was mad at her parents for setting them up, but then she ends up with him anyway (end mini-spoiler). Maybe that’s just me though. 4/5 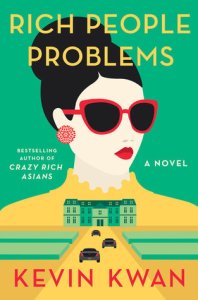 This is the third book in the series. For my review of Crazy Rich Asians go here and it looks like I never reviewed China Rich Girlfriend so…oops. This book takes place maybe a couple of years after the second book? It’s definitely in the same vein as far as tone and writing goes (and so many food descriptions *drools*). The plot didn’t go exactly how I thought it would and I think that’s definitely a good thing. It’s so interesting because this is a world that is so far removed from anything I’ve ever experienced, but it also doesn’t seem that hard to understand. I grew up with a big family on both sides, so I feel like I do kind of get that part of it–I really loved the family politics aspect of the book. Even though the characters and lifestyles portrayed in this book are completely outrageous, the author has still managed to make everything believable. 4/5

8 thoughts on “Back at it again with the Mini-Reviews”