As of this posting, all of these deals are active, but I don’t know for how long!

A Touch of Gold by Annie Sullivan

A Study in Charlotte by Brittany Cavallaro

The Traitor’s Game by Jennifer A Nielsen

The School for Good and Evil by Soman Chainani

The Naturals by Jennifer Lynn Barnes

How to Love by Katie Cotugno

Tell Me Again How a Crush Should Feel by Sara Farizan

The Shadow Queen by C.J. Redwine

The Infinite Pieces of Us by Rebekah Crane

The Disappearances by Emily Bain Murphy

Calling My Name by Liara Tamani

Isle of Blood and Stone by Makiia Lucier

The Alienist by Caleb Carr

The Rainbow Comes and Goes by Anderson Cooper & Gloria Vanderbilt 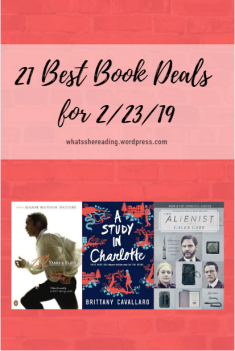 Aila and her brother have just moved to Sterling, the town their recently deceased mother grew up in. Right away, they notice some strange things–the flowers have no scent and there doesn’t appear to be any mirrors in the house. As they investigate, they’ll learn secrets about the town and about their own family. Is it a curse? Or is there another explanation? And what does their mother have to do with it?

This is a strong debut from this author and I’m very excited to see what she brings us next. I was decidedly NOT expecting much from this book. The premise intrigued me, but I didn’t really know what I was in for. As it turns out, I ended up LOVING this book. The writing was so beautiful and the entire atmosphere of the book was ethereal but grounded at the same time. This book seemed to have some magical realism elements woven throughout, but then there was also a sciencey aspect to it and I really enjoyed that contrast.

The main characters are all terrific. I love Aila. She’s fierce but kind at the same time. Her relationship with her brother Miles feels genuine and imperfect, but strong. My heart seriously broke for Miles so many times in this book. I thought that the relationships between Aila and Miles and the Cliftons felt realistic. It helps that every single character had depth–that makes their relationships feel like so much more. The only character I felt lacked a little bit was Will. His motivations could have been developed a little more, but at this point I’m just nitpicking. Even the mean kids at school had depth, which doesn’t usually happen in YA books.

I loved the time period. The book is set during World War II which is the perfect backdrop for the plot. The plot would not have worked in any other time period. We’re immersed into this town that has so much shared history. It’s really created this community that’s had to band together through these trials. Perfect setting.

The story itself is so interesting as well. As Aila starts to try to solve this mystery, the reader feels like they can follow along as well. I mean, Aila’s just reading Shakespeare–I can do that! This book made me want to read some Shakespeare to try to find clues as well. Ultimately, though, I wish that the Shakespeare clues played a bigger role in solving the mystery. It would have been really cool if the reader could solve the mystery by fitting those pieces together, but as the story is written, we can’t. I guess I wish there had been a little bit more of a treasure hunt-ish aspect, but I get why the book wasn’t more like that.

Overall, I thought this book was SO GOOD. Seriously, I think everyone should read it. At this point, it’s super underrated. I have literally heard nothing about this book. So when it comes out on July 4th, I expect everyone to go out and pick up a copy–I don’t think you’ll regret it.