I think I’ve mentioned this before, but ever since I started my job at the library last year I’ve been reading more adult books (rather than YA). Even though I had to leave my library job at the end of May, I’ve still been reading adult books! Here are a few that I’ve read since then (and I’m only just now noticing that all of these covers are red).

Going into this book, I knew it was about alternate timelines but nothing else about it. As the book starts, I felt like not much was happening and I was just waiting for Jason to figure out that he was in an alternate reality. With that being said, I did feel like the narrative picked up significantly when he and Amanda started traveling to different timelines. I liked the few chapters we got from Daniela’s perspective. It made me wonder what I would do if I started noticing small changes like that in my own husband. Without giving too much away, I thought the big discovery that happened 3/4 of the way through was mind blowing but also made perfect sense and really turned up the stress levels. One thing that didn’t make a ton of sense to me was the box itself. I didn’t really understand how it just…WAS in every reality. I feel like it should only exist in the realities in which it’s been built and you should only be able to travel between those realities? Like bus stops. I don’t know–maybe I’m just not understanding the science. Overall, I thought this book was pretty good and interesting, but it wasn’t AMAZING. 3.5/5

After the first book, my expectations for this one were HIGH. It didn’t quite live up to those expectations, but I still liked it. I thought the beginning was a lot slower and the time periods were harder for me to keep track of–I think there were maybe too many different Sydney time periods. As the story finally started to unfold, I wasn’t sure how all of the characters were going to fit together, but when I did start to see it, it was glorious. I thought Schwab did a great job of creating a new antagonist while also making room for Eli to continue being Eli. I wasn’t super invested in the mini-plotline of Sydney resurrecting Serena. I know they were sisters but…I just don’t see how Sydney could possibly think that would be a good idea–especially with her resurrection powers being less predictable on EOs. So yeah, in the end I didn’t think it was as good as the first book, but I liked it and I enjoyed how all the pieces fit together. Seems like there’s potential for a third book? I’d read it. 4.5/5 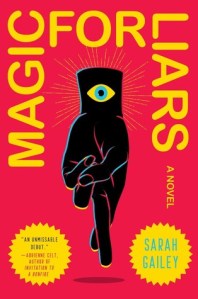 Magic for Liars by Sarah Gailey

I like that Ivy isn’t stupid. That feels kind of weird to say, but sometimes main characters can be a little clueless? I like that we get to see her explanations for how and why she’s manipulating/evaluating people. She’s observant–other characters can’t easily pull one over on her. I liked this world that’s been created. It’s Harry Potter-esque (what magical world isn’t at this point?) but from a non-magical perspective. I thought Ivy’s musings while watching the teenagers doing flippant magic was really compelling. If I were in Ivy’s place I would also be frustrated at seeing kids do stupid magic. You could do so much more and you’re using your magic to change the color of your locker? Or something dumb like that. One issue I did have was that Ivy really didn’t want Rahul to know she wasn’t magical, but I feel like she said 1,001 dumb, non-thinking things to him that would have tipped him off. But overall, I thought this was a really great mystery (and one that I was actually able to solve myself before the end!) and I could maybe see this becoming a series? Like Ivy could go investigate other magical cases. We’ll see. 4/5