I’m sure most of you are already aware, but a couple of days ago some casting decisions regarding the movie adaptation of To All the Boys I’ve Loved Before by Jenny Han were released. Here are my thoughts:

I LOVE THIS CASTING DECISION. Seriously. I haven’t seen John Corbett in a ton of things, but he’s the perfect guy to play the well-meaning but a little lost dad of three half-Korean girls. I LOVE THIS. 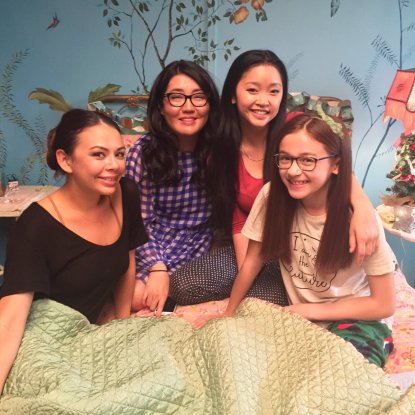 I really like Janel as Margot. She seems the appropriate age and definitely has that older sister vibe.

Lana was the first casting decision I saw and at the time I thought, “Alright, she looks like she’d fit”. Now that I see her with the other two sisters, though, she looks way more Asian than they do. Like…she doesn’t look like she’s half-white while the other two do (and I would know, since I’m only half-Asian and have half-Asian siblings). I just feel like that’s going to bug me the whole movie, but we’ll see.

Anna looks like a suitable Kitty, which is a big relief. Kitty is probably THE MOST IMPORTANT CHARACTER and if they get her wrong, HEADS WILL ROLL.

Sure *shrugs*. This isn’t how I pictured Peter looking (for some reason I thought he had reddish hair?) but I can buy it.

Pretty much the same reaction that I had for Peter. I guess he looks like the boy-next-door type, so I can buy it.

On a completely separate note, IMDB says that Will Smith is a producer? Random.

What do you guys think about the casting decisions for TABILB? Is there another actress/actor that you wish had been cast instead?

15 thoughts on “MOVIE: To All the Boys I’ve Loved Before Cast”