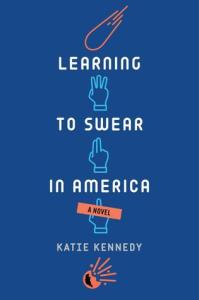 There is an asteroid hurtling towards Earth and 17-year-old Yuri has been brought from Moscow to work with NASA scientists in LA because he is an antimatter specialist. Sure, none of his work has actually been published yet, but he knows he’s right–the math is right. So it’s especially frustrating that his team will not listen to him when he says that using antimatter is the only way to save the planet. On top of that, it’s starting to look like Yuri will never be able to return home (the fact that he snuck a look at some classified documents might have something to do with that though). As Yuri gets used to America, he’ll have to decide whether or not it’s more important to be right or to follow the rules.

For whatever reason, this book was an extremely slow read for me. I just wasn’t really into the story or the characters all that much. I mean, I should care about a plot where an asteroid is coming to destroy Earth, right? But I just wasn’t. Even though there was this terrible, impending doom, the plot was so slow. Mostly the reader is left to consider Yuri’s inner angst. The book also made saving the world from an asteroid seem incredibly simplistic. All we see is Yuri working on it–never any of the other scientists–and all he does all day is math. I mean, perhaps that’s really how it would be, but it just seems so…underwhelming. Has anyone seen the show “You, Me, and the Apocalypse”? Because that’s how I imagine things actually shaking down (good show by the way, I’m disappointed it won’t be coming back for another season).

A slow plot I can deal with sometimes, but the characters in this book seem incredibly unrealistic to me. Not that there couldn’t be a whiz kid from Russia, but Dovie and her family are not real. No way. They’re just too much! They only celebrate made up holidays? What is this? The only one of them I felt like I could kind of connect with was Lennon–he seemed the most normal. The rest of them were just too crazy. I did not like Dovie. That’s basically all I have to say about that. I just don’t get her. Also, the people at her school? Crazy and over the top as well. I mean, maybe some high schools are like that, but mine certainly wasn’t and I have a hard time believing that any high school located in a major city/suburb would be.

I felt that the ending of the book was also anti-climactic. I liked that it didn’t end right when the world was or was not saved from the asteroid, but the way the aftermath was described didn’t excite me. Overall, I thought this book had a pretty good idea, but lacked in execution. Probably give this one a pass.