Georgiana didn’t mean to set her father’s stables on fire. She was just trying to perfect her new formula for invisible ink when a stray spark got away from her. Now she’s on her way to the Stranje house–a place where they torture girls into becoming suitable wives. At least, that’s its reputation. She soon realizes that Stranje house is not all that she’s heard it to be and that she may have found a place to call “home” after all with people who might understand her. 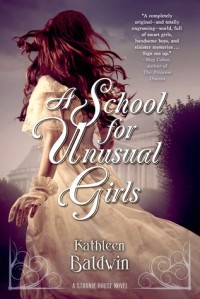 This book was a bit reminiscent of the Maids of Honor series by Jennifer McGowan with a dash of The Finishing School series by Gail Carriger (both series that I enjoyed). The book was probably a tad predictable–especially if you’ve read other books like it–but no less enjoyable in my opinion. The main character, Georgiana, was spunky and smart. Like super smart. I liked learning more about her as well as the other girls. Tess, Sera, Jane, and Maya all seem like very interesting characters and I look forward to getting to know them better in future books.

There were a couple of minor issues that I had with the book. When they first introduce Miss Stranje they describe her features as being ageless. One second she looks really old, the next she looks super young…yeah never heard that one before. It doesn’t feel all that necessary to have a mystical quality about her looks. Just describe what she looks like! The second thing is that it takes a long time for us to figure out what is going on with the school. All of the characters are being super vague about what goes on. Isn’t there some sort of orientation that Georgiana should have attended right away? I don’t know, it just took a while and that bugged me. Lastly, I didn’t like how long it took Georgiana to trust the other girls and Miss Stranje. How many times does Miss Stranje need to be normal and kind before you believe she’s not going to put you on the rack? I mean, seriously.

Even though I did have a few issues with the book, I really did enjoy it. Even though Georgiana and Sebastian form an attachment pretty quickly, it didn’t feel like insta-love and I appreciated that. At the end there’s a note from the author explaining that this book explores the “what-ifs” of history. I like that idea a lot and I’m really excited to read the rest of the series. Get A School for Unusual Girls yourself when it comes out May 19th.