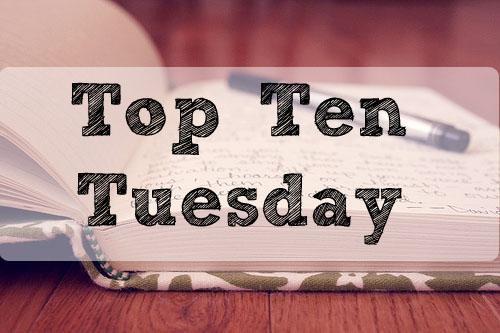 Top Ten Tuesday is a weekly meme hosted by The Broke and the Bookish.  Each week there is a new topic and this week’s topic is: Top Ten Books Which Feature Characters Who _____ (are musically inclined, have lost someone, have depression, who grow up poor, etc.)

I love this week’s topic! I always like reading through other people’s lists and I love that this week everyone has a different list because they chose a different fill-in-the-blank! My topic is going to be Top Ten Books Which Feature Characters Who Have Fun/Cool/Interesting Talents or Hobbies. Basically anything that I read about and am like, “Dang, I wish I could do that.”

1) Cath from Fangirl by Rainbow Rowell – Cath is a really talented writer and she’s very passionate about it. I’m not sure that I have anything in my life that I’m that passionate about so reading about her love for writing is really inspiring.

2) America from The Selection Series by Kiera Cass – America comes from a family that is, for the most part, really talented artistically. There are a couple of scenes throughout the series when America plays the violin. Again, I’m not that talented at ANYTHING so I’m just floored thinking about her talent.

3) Wes from The Truth About Forever by Sarah Dessen – Wes makes these cool metal art pieces that are described pretty well, but that I would still love to see in real life. I have a friend whose dad makes metal art pieces and they are so cool! I think it’d be awesome to be able to take “junk” and turn it into a meaningful piece of art.

4) Juliet from The Madman’s Daughter Trilogy by Megan Shephard – Juliet must be crazy smart to be able to do all of the science/medical experiments that she does. I mean, I know that she learned some things by watching her dad, but she didn’t really have any formal schooling. So props to her. You go girl.

5) Patsy from Hit by Delilah S. Dawson – This is a book that I haven’t actually finished yet, but Patsy does something called “yarn bombing”. Just look it up, it’s pretty cool. I can knit, but I haven’t done much of it because there are only so many scarves a girl can wear. I like hearing about why she does “yarn bombing”.

6) Sloane from Since You’ve Been Gone by Morgan Matson – I’m counting Sloane’s lists for this one. I’m a list maker (at times) so I like reading about the lists that she leaves behind for Emily.

7) Katniss from The Hunger Games Trilogy by Suzanne Collins – Katniss has some pretty cool hobbies that make her survival in The Hunger Games a little easier. First of all, she can hunt, but more importantly (in my opinion) she knows about plants. She can tell what’s okay to eat, what’s poisonous, and what can maybe work as a medicine. Good things to know about.

8) Kate from Blackmoore by Julianne Donaldson – Kate likes watching birds and has a ton of bird calls memorized. I think that’s so cool! There are a ton of birds that live in my area and I think it would be awesome to be able to tell bird calls apart.

9) Marguerite from A Thousand Pieces of You by Claudia Gray – Marguerite is described as being a really good artist. Her sketches tell more about a person than a photograph or an entire biography could. I’ve always wanted to be able to draw so…yeah there’s some talent envy going on right here.

10) David from The Reckoners Series by Brandon Sanderson – David has cataloged every single Epic that he could. While not a hobby that I could necessarily pick up (since, you know, Epics don’t really exist) I’m impressed by his focus. He is so obsessed with his records, maintaining them, making sure that they’re accurate. That’s very impressive to me.

Thanks for reading! Did I miss any characters that have fun/cool/interesting talents or hobbies? Let me know in the comments! For the record, I did consider Harry Potter, but magic and quidditch are just two things that I could not relate well to my own life so I decided to pick other characters.