In Perdido Beach, CA everybody over the age of 13 has vanished into thin air. Soon the kids discover that some of them have special powers, animals are mutating, and there’s an invisible wall surrounding their town. Bullies from the local private school, Coates Academy, are soon running things in a way very reminiscent of Golding’s “Lord of the Flies”. Some kids are interested in finding a way out, some kids rejoice in their new-found power and authority, and some kids are just trying to stay alive. 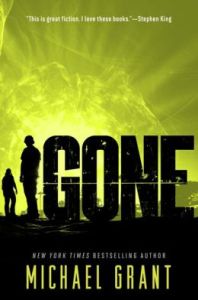 I loved reading “Lord of the Flies” when I was in high school so I was excited to find a book that has a similar premise (kids running wild without adult supervision). Just a warning right off the bat: this book is long (almost 600 pages) and it’s the first in a six book series (all about as long). If you do not have the time, the patience, or the desire to invest in this series, I do not recommend starting the first book. That being said, up to this point I have only read “Gone” (although I do have the second book in the series waiting on my Kindle as I’m writing this).

With that disclaimer out of the way…the book was pretty good, but frustrating. First the good. If you’ve read any of my previous reviews, you’ve probably picked up on the fact that I appreciate realism. Even in fantastical worlds that abide by different laws than Earth, I appreciate when characters are realistic in their choices and reactions. This book mostly does that for me. The author acknowledged the reality of having all adults disappear simultaneously. Babies and small children would die if no one were there to take care of them and the author brings that up. The older kids in charge may not have been as realistic as I would have liked…maybe a little too smart/clever for 13-year-olds, but I can forgive that.

Now for the bad. The mutating animals are just weird and whatever darkness is going on in the mountains…also weird. The special powers are also a little hard for me to swallow, but I’m more okay with that than I am with the talking coyotes. Like I said, weird. My main issue with this book is the length. It’s interesting to read about how the kids reestablish civilization and all that, but does that really take 600 pages and five more books? I just want to know how the kids get out and if they’ll be reunited with their families! Truth be told, if I wasn’t so interested in how that was going to happen I probably wouldn’t read the rest of the series. Alas, I’m dying to know how the heck they get out of this dang city. Looks like I’ll be slogging my way through 2,500 more pages of pre-teens fighting with each other.

The rest of the books in the series: Hunger, Lies, Light, Fear, and Plague.

Lara Jean has a system for getting over boys. She sits down, writes the boy a love letter, addresses the envelope, and then sticks the letter in a hat box. She’s written five in all: one to a boy from summer camp, one to Peter who kissed her even though he liked another girl, one to a boy who’s moved away, one to a boy who comes out in high school, and one to her next-door-neighbor, Josh. Josh also happens to be her older sister’s (ex-)boyfriend–a sister who is conveniently on another continent going to college. These letters were never meant to be read, but one day they’re accidentally sent out. Lara Jean is left to deal with the fall-out of having some of her most private thoughts read by the very boys they inspired.

I really liked Lara Jean’s relationship with her two sisters Margot and Kitty. Their mother died when they were fairly young and so the three girls were left to be raised by their father. Margot is how I would imagine a typical older sister would act in a family situation such as this. She’s taken charge of the family and has always made sure that her younger sisters have what they need. This creates a unique relationship between her and Lara Jean. Margot is part sister, but also part mom which made things interesting at times. I also liked seeing Lara Jean interact with Kitty, her younger sister. Overall the relationships seemed very real.

I thought it was interesting that one of Lara Jean’s love letters would be to her sister’s boyfriend, but I didn’t really like how Josh reacted to it. It seemed to me like he had a chance with both sisters and he made his choice. When he receives his letter he all of the sudden starts to have second thoughts. I didn’t like that he started to go after Lara Jean a little bit and I didn’t like that Lara Jean wanted to make him jealous. What was that going to accomplish? Lara Jean knows that he’s probably going to try to get back together with her sister, but she’s going to subtly go for it anyway. That being said, if she hadn’t hatched her brilliant plan to make Josh jealous, then she never would’ve gotten together with Peter. I thought Peter’s character was interesting because he’s a lot more complex than he seemed on the surface and that’s something that Lara Jean discovers throughout the book. Also, I loved the interactions between Peter and Kitty.

I liked this book quite a bit! I always love when the characters seem real and I felt like Lara Jean’s family could’ve lived next door. I’ll definitely be reading the sequel P.S. I Still Love You which comes out May 26th.

Olivia is a girl living in Portland, Oregon in the early 1900s. She and her friends have become tangled up in the movement for women’s suffrage and her dentist father is not happy about it. He hires a traveling hypnotist to cure his daughter of her dreams. Unfortunately for him, the hypnotist uses careful wording to create a different cure. He hypnotizes Olivia to see the world how it truly is. When Olivia comes out of her trance she sees her father as a vampire, the hypnotist’s sister as a flickering candle, and the women against suffrage in cages. 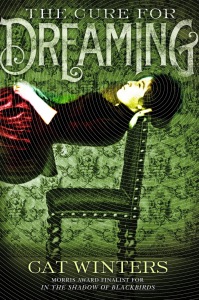 What I liked: I thought the premise of this book was really interesting as I haven’t come across many YA books about hypnotism or women’s suffrage. I really liked the way this author realistically portrayed all of her characters and the situations they find themselves in. Olivia was a very strong female lead and I thought that Henry was a very realistic character as well. The only character I wasn’t sure about was Olivia’s father. I just didn’t know if I could buy him as being realistic. He seemed too much. Too explosive, too drastic, and too…well, mean. He drove his daughter away and didn’t seem to notice or care that he was doing it.

What I didn’t like: While Olivia herself was a realistic character, I didn’t feel like she reacted to her new “vision” realistically. In one scene she goes to a dinner party with a boy and the entire table seems to be filled with young vampires drinking blood. Olivia freaks out. To me it seemed obvious that, of course, they’re not real vampires and I didn’t understand why she was about to faint every time she saw one. Putting myself in her position, I think I might have felt a little frightened, but I think I would have been fine… Who really knows though? I get pretty freaked out at haunted houses even though I know they’re not real so maybe I would have had a similar reaction to Olivia.

Without giving any spoilers, I thought the ending was really well done and fit with the tone of the rest of the book.